Facts:  Various residential borrowers executed notes secured by mortgages.  Under the terms of the documents, the borrowers were permitted to make very low initial payments.  The Truth in Lending Disclosure Statement ("TILDS”) given to each borrower failed to state that if the borrowers made payments pursuant to the payment schedule set out in the documentation, the principal on the loan would increase over time and that the borrowers would lose equity in their homes with each payment, a process sometimes called "negative amortization."  After the origination of the transactions, the originating lender would sell the loans to an assignee, pursuant to a pre-existing master purchase agreement.
Eventually, the borrowers brought a class action against the originating lender and its assignee, claiming that the lender and the assignee had committed fraud by failing to tell the borrowers about the negative amortization.  The assignee brought a motion for summary judgment, arguing that the documents were not misleading and that it could not be held liable for the conduct of the originator.  The borrowers cross-moved for class certification.
Reasoning: The court denied the assignee's motion for summary judgment:
[S]imply providing technically accurate disclosure does not excuse the potentially inadequate or misleading character of other disclosures, or lessen the resulting potential for confusion . . . .  It is of course possible that a buyer would pay more each month than the schedule provided for in the TILDS, thus avoiding negative amortization. But the Court will not turn a blind eye to the fact that the document at issue here is, as far as the Court can tell, designed to mislead. Nowhere in the TILDS, or the Note for that matter, is there any revelation of the fact that the interest rate is certain to sharply increase after just 30 days. Nor does the TILDS contain any indication that following the payment schedule provided will unquestionably lead to negative amortization . . . . [W]ere one to follow the TILDS payment schedule, after 59 months of payment, the borrower would owe 110% of the original principal.

The court went on to hold that the assignee could be held liable for "aiding and abetting" the loan originator's fraudulent conduct because the assignee knowingly rendered "substantial assistance" to the originator.  The assignee argued that it did not have actual knowledge of the fraud, but the court disagreed:

[The assignee] argues that in reviewing the loan documents it was simply engaged in typical due diligence. However, . . . [the assignee's] due diligence may well have imparted the knowledge required to establish aiding and abetting.

Finally, the court held that because the assignee's funding was critical to the loan originator, the assignee could be held liable for having provided "substantial assistance" to the originator:

[The assignee] was one of [the originator's] major secondary market purchasers, as well as the affiliate to a major warehouse lender. Hundreds of millions of dollars, if not billions, flowed through [the originator] because of [the assignee's] involvement.

The court went on to certify the class.

Author’s Comment:  Note that this is not simply a Truth in Lending Act case; instead, the borrowers (acting as a class) assert that the loan originators committed common law fraud and that the mortgage purchasers are liable as aiders and abettors.  Naturally, one's sympathy is with the borrowers, who were undoubtedly defrauded by loan originators who concealed the inevitable negative amortization of these mortgages.  But to extend fraud liability to the purchasers on the secondary market would greatly expand the scope of potential defendants, making these "toxic assets" doubly dangerous.

On one hand, this decision might be worrisome to anyone holding interests in bundles of residential mortgages.  On the other hand, though, perhaps this decision can be restricted to its facts: it might only affect assignees with direct contact with the loan originator, rather than those who purchase residential mortgages through intermediaries.  In that case, although many large institutions could face fraud liability, tertiary or remote investors in mortgage-backed obligations should not be too concerned.

Email ThisBlogThis!Share to TwitterShare to FacebookShare to Pinterest
Dear Readers:  This is an important case with commentary by Professor Dan Schechter, Loyola School of Law.  Note his commentary about how the courts may be angry with the banks for their faux pas, but they are also growing weary of homeowners who are unwilling to pay.  Keep this in mind.

Best to you all:

Facts:  Two individuals borrowed $670,000 to purchase a home.  The deed of trust named Mortgage Electronic Registration Systems, Inc. ("MERS") as the beneficiary, but the deed of trust failed to name a trustee.

Reasoning:  The court noted that although this was an issue of first impression in California, courts in other states have uniformly held that the omission of a trustee does not preclude nonjudicial foreclosure.  On appeal, the borrowers argued that a conveyance that fails to name the grantee is void.  But the court rejected that argument:

A grantee is not the same as a trustee.  The character of "title" provided by a grant deed differs substantially from that provided by a deed of trust.  A grant deed conveys a fee simple title to the grantee for all purposes . . . . In contrast, a trustee under a deed of trust "carries none of the incidents of ownership of the property, other than the right to convey upon default . . . ."

The court went on to hold that the foreclosing party did not have to produce the original promissory note and that the borrowers' failure to tender the balance due stripped them of standing to challenge the foreclosure sale.  The court concluded with the following observation:

We are mindful that foreclosures are a far too frequent occurrence in today's difficult financial times.  But the hardship must not become a haven for those who, as here, do not appear to make any good faith effort to resolve the issue but, instead, seek shelter in minor ministerial omissions or speculative acts that neither misled nor prejudiced them.

Taking a step back, however, one has to ask: how could any lender ever draft and record a deed of trust without naming any trustee?  Admittedly, it is very easy to change trustees and to substitute one for another.  But it would seem obvious that the transaction should begin with someone nominally occupying that role.  The court rescued the transaction from this defect, but it should never have happened in the first place.

The court's world-weary observation about borrowers who "seek shelter in minor ministerial omissions" is telling:  although the courts are disgusted with the financial industry's shoddy practices, they are also losing patience with borrowers who cannot pay and who simply seek to delay the inevitable.

Posted by Unknown at 2:57 PM No comments: 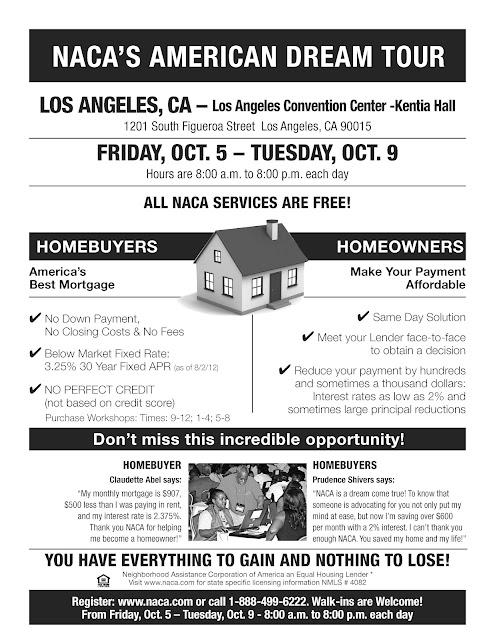 Posted by Unknown at 4:41 PM No comments:

The Nails are in the Coffin When it Comes to Wrongful Foreclosure.

Resent research has shown that the typical wrongful foreclosure case involving big lenders such as Bank of America, Wells Fargo, Chase, Citibank, Deutche Bank, and Mortgage Electronic Registration Services (aka MERS) have all the rulings going in their favor.    It doesn't seem to matter if you pay attorneys $10,000 or more for litigation to stop or enjoin a foreclosure, the courts are ultimately not ruling in our favor.  This case embodies every last theory I had in my bag of tricks to go after a wrongful foreclosure case.  All wiped out.

Borrowers under deed of trust brought action against Federal National Mortgage Association (Fannie Mae) to set aside the trustee's sale of their home, to void or cancel the trustee's deed upon sale, and for violation of the statute governing assignment of power of sale.

Court of Appeal 4th District Affirmed the trial court's rulings which held that:
1.  MERS had authority to assign deed of trust;
2.  The assignee of deed of trust had authority to execute substitution of trustee;
3.  Civil Code § 2932.5, the statute governing assignment of encumbrancer's power of sale did not apply to power of sale under a deed of trust; and
4.  That Fannie Mae was authorized to initiate foreclosure before assignment of deed of trust was recorded.
Readers it is crystal clear.  You are going to have to reconcile with your lender or try to get them to give you a loan modification, or get out using short-sale transactions, or simply walk way in foreclosure.  NOW more than ever you need the qualify services of the Law offices of R. Grace Rodriguez, to help go over your strategy for dealing with the mortgage nightmare that America's leading lenders handed you to deal with.  You must speak with competent bankruptcy attorneys who can help you with all different types of bankruptcies if they are necessary to help you achieve your goal of saving your home.  Alternatively you can benefit from our extensive skills in helping you maximize the benefits of surrendering your home and achieving the greatest cost savings, potentially leaving you with the ability to purchase a new home with the savings you have achieved.

Call us today for help.  The consultation is free!
Posted by Unknown at 11:54 AM 2 comments:

TODAY WELLS FARGO BANK is continuing their home preservation workshop at the Ontario Convention Center.  Unfortunately they don't pubically announce these events always in advance.  But I heard about it today.  SOOOOO

Gather up the following:

1.   3 months of Paystubs
2.   6 months of bank statements
3.  2011 tax return if you have it, if not 2010
4.   bring any rental agreements you have to prove people inside your house are giving you money to rent a room
if you are doing that.
5.   Bring a utility bill so that you can prove you are living at the house.
7.   Prepare a hardship letter.  TO WHOM IT MAY CONCERN:   Explain why you need a loan modification
and what has happened to your income. If someone died who brought income into the house bring the death
certificate.  If you got sick bring something to document your illness.
8.  If you are self-employed bring 6 months of business bank statements and print out a PROFIT LOSS statement from your accounting software. If you don't have this, make one on an excel spreadsheet.

With all of this documentation be prepared to show that at the very least if the balance of your loan was stretched out to 40 years at 2 percent, the payment plus taxes and insurance would not be greater than 31 percent of your income.  If that is the case you will improve your chances of obtaining a permanent loan modification.

There is no mystery to loan modification.  Loan modification should not cost you thousands of dollars by the real estate fraudsters out there who want to charge you by the month for each month they keep you in your home.  That will be my next article.

So if you have a Wells Fargo Loan.... please go there today if you need help!

Best to all of
Grace
Posted by Unknown at 4:19 AM 1 comment:

The Law offices of

You can't protect rights you don't know you have. Call every lawyer in town until you can find one that is willing to give you a free consultation. Find an attorney who will look at your situation and help you come up with not only a plan to solve your problem, but do it at a fair price on a budget you can afford. That should be the goal of a respectable attorney who truly wants to help his or her community in a meaningful way. To find that attorney in So. California you only need to make one phone call. Call us!

Make An Appointment with Us